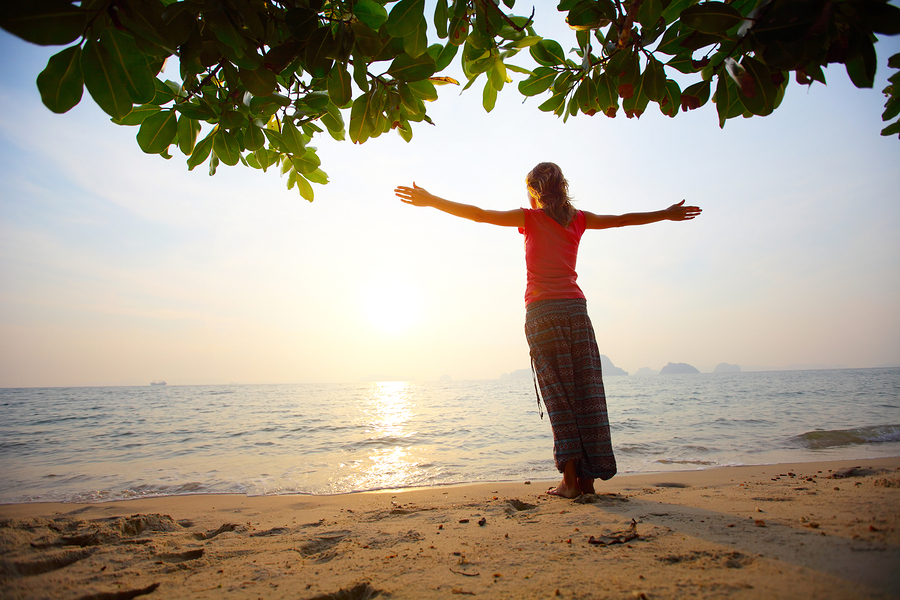 Hope you enjoyed your weekend of water slidin’ at the pool with your genie.

We had a big week last week – lots of new ideas on how to turn wishes into goals and goals into reality. We covered the six giant rules for making any goal happen. . . . remember . . . ?

OK, now I’m betting that as you worked on dumping that GOAL down the waterslide of your mind this weekend, you may have noticed a couple of totally diverse and opposite feelings – or thoughts – start to show up.

Seriously! How can two completely diverse emotions live in one body AT THE SAME TIME?

And … congratulations … now you know.  You’ve got your own movie franchise going on right inside your body.  The GOOD news is that this is totally NORMAL. You have not suddenly developed a disease. You have not suddenly lost your marbles. In fact … the mere fact that you’ve recognized it puts you WAY ahead of the human curve.

The BAD news is that.  When most people sense their own Darth Vader suddenly appearing with that big light saber thing to slash their water slide to a puddle of smoldering fiberglass, they tend to sprint from the pool forever.

NOT the kind of action I’m recommending you take on your “action” list.

TODAY, we’re going to focus on the cowboys in the white hats. The faster you can build your own army of “The Good Guys” –  those ideas and emotions and even other people who support you and fight for this rebellion of yours … because it really is a rebellion … which I’ll explain tomorrow – anyway,  the faster you can assemble your Good Guys army, the better.

Fortunately, it’s scientifically proven that “good” vibrations actually carry a stronger potency than “bad” vibrations … which may be one reason why the Texas Chainsaw Massacre guy and Kylo Ren … never win.

Alright, so let’s think about the most powerful emotions that register high on the richter scale of “GOOD.”

… Joy. That’s one of those instantaneous things like the Christmas morning you saw that snowboard propped against the tree, or the moment you got behind the wheel of your car after getting your driver’s license, or the day you were selected FIRST for dodgeball during recess when you were 8.

… Gratitude. Good one! We’ve got an entire lesson on that one coming up soon.

… Awe. As in A-W-E, awe. Nice one. That’s goodness on a grand scale, like seeing the Northern Lights in person or standing on a beach seeing the ocean for the first time.

And then there’s Expectation.

“Expectation” is arguably THE most powerful emotion you can feel. People don’t talk about it much, per se, and you know why I think that is? … It has SO much power, that it can be swayed to join either camp. It’s like the Luke Skywalker of emotions.

When it’s on your side, it becomes your genie’s BFF.

When it goes to The Dark Side, you’ve got trouble on your hands.

Think about it for a minute.

If you walk into class expecting to struggle on a test, what happens?

If you walk up to a person of interest with HOPES of asking him or her out but you have every EXPECTATION he or she will find an excuse not to accept … guess what’s going to happen?

If you hear rumors about a particularly tough teacher and walk into that person’s classroom expecting him or her to be that person. What will you experience?

You know that water slide example I keep talking about?

I want you to think about a time – the first time you actually in real life climbed a pool ladder to your first diving board or high diving board or normal pool slide or giant water slide. It doesn’t matter how many stairs there were – there were stairs going somewhere that you had never climbed before.

Expectation can go to The Dark Side in a nano-second.

As you climbed those stairs and looked down at the blue abyss below, there was a tiny sliver of time – a bare nudge of a second or two – when you probably felt resistance or fear. And in that tiny sliver before your MIND told your body to make that TINY move that would commence the  scooching down the slide or jumping from that board, you made a decision … you made a decision to approach the task with happy or hopeful expectation … or you approached it with fearful expectation.

And, for the rest of your life, whether you climbed those stairs again a thousand times or never approached them again … I bet you’ve never switched sides.

That’s how strong the expectation is.

You understand?  Expectation can go to The Dark Side in a nano-second.

Now that you’re aware of this, you now know something that 97% of the entire world’s population doesn’t know and will never know … YOU HAVE THE POWER to choose.

You know what it feels like when you expect something to go wrong or not be an enjoyable experience.

You know what expectation feels like when you’re happy and hopeful and joyful.

So, as you climb your steps to that imaginary water slide in your mind … and you sit yourself down and think about your really big goal that you want more than anything … remember that you’re in charge of that sliver of time … that single second before launch where you can CHOOSE happy expectation BEFORE you send that idea down that slide of your mind.

Remember. Your genie down there, paddling around in the pool, waiting for that big goal of yours … he will see it arrive either clothed in positive expectation or negative expectation. Remember, the genie only acts on EMOTION and REPETITION.

When you clothe your idea in POSITIVE expectation, you’re going to be absolutely amazed at how quickly your genie gets the message and calls HIS army into action … and he’s got the biggest army ever. Let your genie work for you, my friend.

Fill your mind with the positive emotion of expectation.

After all, in every movie you see, the good guys always expect they will win in the end. And they do.

Your life may not have seemed like a perfect Hollywood ending up until now. But now you know the secret to make it so.

See you on my next blog!